The toilet and cistern were coupled together with the cistern sitting directly on top of the toilet pan. This is known as “ close coupled” and are basically forms one unit. The unit has a mains cold feed and the large soil pipe outlet which feeds out of the house to the sewerage pipes in the street.

The main cold feed was then turned off and the faulty pipe disconnected and replaced.

The mains cold feed was turned on and the new connections and pipe checked.

All was OK so the unit was re connected to the soil waste pipe and then flush tested to check the waste pipe connection. The toilet unit was then re fixed to the floor and wall on the understanding that the householder would need to arrange some tiling and making good of the wall behind the unit which we could do if required at a later stage.

As often happens with advances in design the coupling together of the toilet pan and cistern can and does look good but in reality and in practical terms this design creates problems of its own. A common problem is that the connection between the toilet pan and the cistern requires a seal which allows the flush water to flow from the pan to the cistern but not leak. The seal known as a “ doughnut.”  Its rubber and perishes over time causing a leak and this of course means the pan and cistern have to be separated in order to replace the seal. 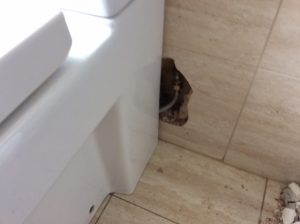 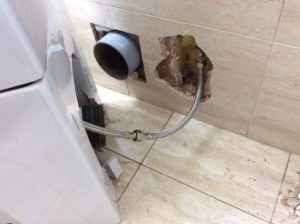 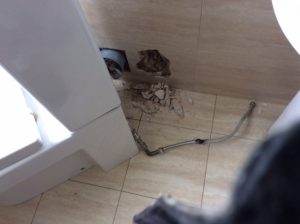