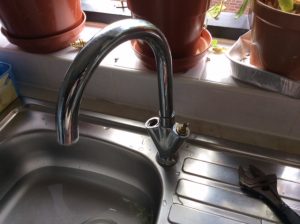 The customer had a mixer tap on her kitchen sink which had become stiff to turn on and off. This always happens with age and use. In almost every case there is no need to replace the whole tap unit as replacement internal parts can usually be easily and fairly cheaply obtained from plumbing suppliers.

The solution is to replace the tap body which is the valve in the tap which does the work.

In this case the tap was a mixer tap so it has a hot and cold feed with two taps and so two tap bodies. 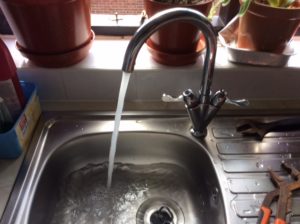 The hot and cold feeds had to be isolated either by using isolating valves under the sink on the feed pipework or if not fitted  it will be necessary to turn off the house cold mains and drain down the hot water pipework but hopefully the cylinder can be isolated if the water heating is by conventional boiler or immersion heater.

The two separate taps making up the mixer tap can then be stripped down and a new tap body fitted to each.

Water back on and wow the tap is as good as new !