A toilet / WC is as we all know, a means of disposal. It works by the use of the bowl and a water tank above it – called a cistern.  The method is simple in that water is stored and released to flush out and clear the bowl.

Cisterns can be high level, low level or close coupled depending on their closeness to the bowl. They all do the same job and need a means of allowing a water flow into them, which is then stopped at the right level by means of a float operated valve (previously named a ball valve). The water is then released down a flush pipe to enter the bowl and do its work. 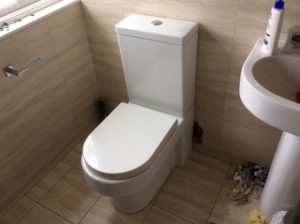 Cisterns have a syphon mechanism which allows the water to be released when the handle is pushed/pulled/button pressed, etc. A float valve is used to stop the incoming water at the right level, then there is an overflow going to the outside of the house in case of overfill.

If the WC is in a basement with no means of the waste running away by gravity as usual, then a pump unit is used. Saniflo is a well-known brand name for such a unit. This will pump waste up to the floor above where it can enter the household waste pipework.

What happens when the overflow leaks?

Well you might notice the overflow pipe on the outside of your house is running constantly, you definitely have a bit of a problem. You need a plumber fast! Good job you’re on our website! Call Plumber Northampton and we will soon have you ship shape! Call now on 07494 123 007 or email plumbernorthampton@gmail.com