The customer was totally renovating a large 3-bedroom house and had decided to convert the large roof space area into an extra bedroom with an en-suite bathroom. Most properties of that age (100 years old) have roof spaces because roofs were designed not to have trusses crisscrossing the roof space. This therefore provides an open space almost always large enough to allow a room to be built into the roof space. In this conversion, the bathroom would contain a (double sized shower tray), basin and toilet. The bedroom would contain a radiator. To install these fittings meant running hot, cold and waste pipework up inside the property and into the new bedroom and bathroom. The waste pipework from the shower, basin and toilet would of course have to be run back down to the external house drainage.

Then we Did It

15mm copper pipework was run from the cold main feed up to the toilet cistern, basin and shower. The shower and basin also required a hot feed from the combi boiler situated on the floor below. The shower was the bar mixer design which as with all modern mixer units was combi compliant. Flow and return copper pipework was run from the combi boiler to feed the radiator. To facilitate the soil waste from the toilet it was necessary to access part of the remaining roof void in order to run the large plastic soil pipe out of the building wall and down 3 stories to an existing access chamber where the pipe ran a short distance underground to a new access into the chamber.

The shower area had a door and plastic wall linings which are bought in sheets and then as the name suggests line the walls of the shower. These wall sheets seal at the top, corners and bottom at the shower tray with silicon. 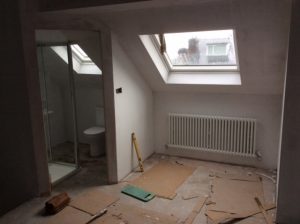 The layout of the bathroom and bedroom with work in progress 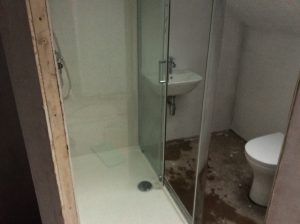 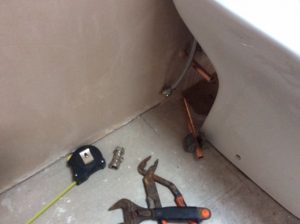 The toilet being connected 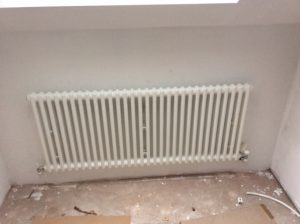 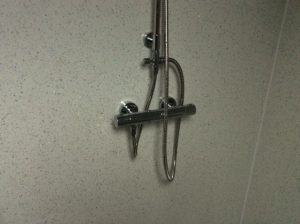