When someone says drains we all think of underground pipes for obvious reasons.

Household drains are vital they carry away waste i.e. drain it away from the property.  They work away year after year unseen and forgotten but if something goes wrong then oh boy do you know about it.  Lets take what is known as soil waste, that’s toilet waste to most people.  The soil waste pipework goes from inside the house to the outside world which suits everybody just fine, but if a blockage occurs and the one toilet most houses have is unusable it rapidly becomes a disaster often leading to lots of shouting and divorce.

Ok possibly an exaggeration but if the toilet pan has overflowed and something nasty is happening to the ceiling below then help is needed quickly.

Flowing, or not, away from that subject to lets say a simple blockage causing the kitchen sink to refuse to empty.  This can often be solved by a plunger or dismantling the pipework under the sink.  This is the plastic pipework that connects to the underground drainage pipework.

OK back to the toilet or WC pan its proper name.  We would initially use a plunger and then if no good look for a manhole oops access chamber outside of the property.  Drain rods would be used to attempt to clear the blockage and if this fails then we have high pressure jetting equipment which will clear the blockage and clean the pipework. Often this is preferable to removing the pan from the internal pipe connections.  Sometimes the blockage can be some distance away. 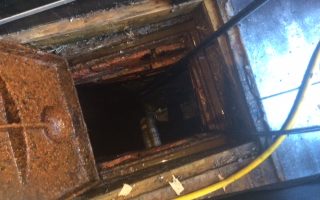 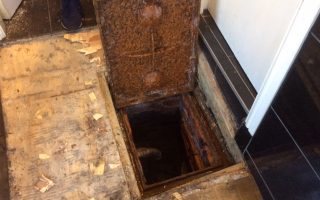 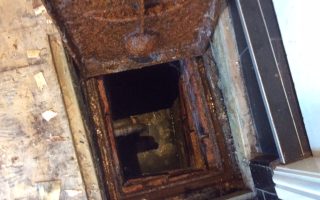 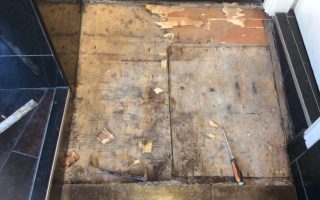 In the photos above you can see that this unfortunate householder with a blocked toilet had an access chamber inside the house under the flooring just inside the front door.
It took some finding as there was no sign it was there and the householder had no idea it was there.
Having jetted from different directions we were sure that there must be an access chamber in the house around that position and following a strong hunch we dug out and removed the flooring to find the chamber cover.
After that a standard high pressure jetting procedure followed which cleared the blockage.
We can probably teach Sherlock Holmes a thing or two !

The kitchen sink waste in many properties appears outside and flows into a square  open drain with a grill over it.  This is a gulley drain and has a trap i.e. a u-bend with water in it. The idea is to stop smells being allowed to come from the underground pipework. Leaves often collect in this type of drain if the cover is not fitted and then rot at the bottom of the trap eventually causing a blockage which is almost always easily cleared using a rod and a 6 inch flat rubber disc.

We have many years experience in successfully dealing with all of these problems and more! If you have got blocked drains call Plumber Northampton now on 07494 123 007 or email plumbernorthampton@gmail.com