The box of tricks

The white box in the picture is a macerator often called a “saniflo” much in the same way that a vacuum cleaner is called a “hoover.” 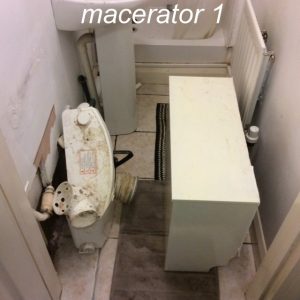 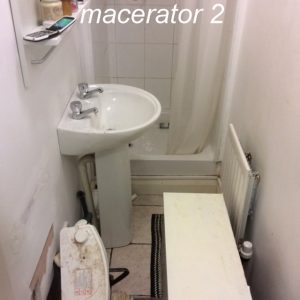 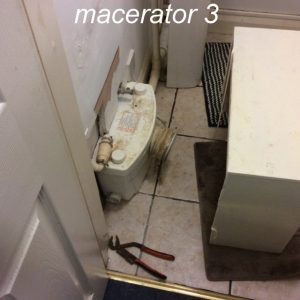 Its job is to literally slice up sewerage and pump it to a place where it can be fed into the house sewerage pipework.  Such a unit is needed when a toilet or shower etc. is positioned in the basement of a house.  It provides the method of getting this waste up to the main drains outside of the house. The unit has an electric motor inside.

The photos here called “macerator 1,2 and 3 show the unit removed from its wall / floor mounting and disconnected from its flow -in and flow-out pipework.

This particular unit was in a basement and was old and troublesome.   Rather than pay for a new unit which can cost up to £300 the house owner had asked us to remove the little used toilet and in so doing reduce the workload of the macerator unit.  The unit now had a much lighter load of the basin and shower to deal with.

Problems were still happening and as a last resort we suggested a full service of the unit. The basin had emptied its waste water into the shower tray before the macerator unit had got going (the basin is of course higher than the shower tray and don’t forget the waste needs to go up hill from the basement)

We stripped down the unit and found it to have a damaged rubber seal at the off/on switch and a broken retaining clip. These components together meant that the unit could only work intermittently.  Once they were replaced it worked well enough to service the basin and shower.

A lot of public houses and restaurants have cellars in which they store beer in barrels.  As a result of leaks when barrels are changed and general washing down of the cellar waste water builds up.   It is usual to have a sump pump which is literally a pump sat in a hole usually in a corner (the cellar floor slopes towards it) which then pumps the waste up to ground level and the buildings drains.